Petroleum or hydrocarbon refining depends on the utilization of several mechanisms in chemistry to produce a variety of finished product. It also depends on materials having distinct physical properties. One property of interest is boiling point. The boiling point of a given material is the temperature at which the liquid has enough energy to turn into a gas under a given pressure.

Refineries utilize boiling point to separate materials from each other, as many of these materials have distinct boiling points. The one problem they have afterwards is what to do with the material while it is in a gaseous state. In most cases, they cannot do much. So, they need to turn it back into a liquid. This process is simply the opposite of getting to the boiling point.

But how do they do this? They must cool the material or get the heat away. The best way to do this is with units called heat exchangers. In this case, they are quite often called condensers, and can be either liquid- (e.g., a vehicle radiator) or air-cooled (e.g., fin-fan heat exchanger). And condensers can manifest themselves in many other ways including those utilized in vapor recovery. Vapor recovery or vapor return units can be found anywhere where hot materials are temporarily stored. They simply condense all the vapors that are emitted from a hot fluid and collect them, so they are not emitted to the atmosphere.

This mechanism is also used when refineries have a fluid that is largely a mixture of both a vapor and a liquid. Quite often, they will need that vapor to separate from the liquid. They will achieve this separation by allowing the mixture to enter a vessel where the liquid falls due to gravity permitting withdrawal of the gas. These vessels are sometimes called knock-out drums, flash drums, flare knock-out drums, compressor suction drums, or knock-out pots.

All these units do not operate with full efficiency, or they are operated to collect waste fluid. One of issues with this collection process is that the fluid itself cannot be returned to the processing loop in which they make sellable material. Therefore, the fluid needs to be pulled off and sent to disposal. Unfortunately, the fluid can be highly contaminated with such things as hydrogen sulfide (H2S) gas. So, before they send it to disposal, the fluids need to be treated to reduce the emissions of this gas.

A bigger culprit for producing such contaminated fluids can be found in amine processing units. These units utilize an amine solvent to help remove hydrogen sulfide gas from a vapor stream. But what do they do with the amine afterwards? They need to recover it. So, refineries will heat the contaminated amine under low pressure to get the H2S to boil off. But then what? They cannot handle the H2S very well in a gaseous state. So, they will often cool it, compress it, and then send it off for neutralization or disposal. In the meanwhile, many of the pumps, exchangers and compressors attached to the amine regenerating unit will have liquid scrubbers attached to them. This liquid will scavenge any H2S that escapes as a gas, because not all processes are 100% efficient. But there comes a point where the liquid cannot take up any more escaping gas and therefore requires removal, treatment, and disposal.

In summary, you can find many sour fluids requiring disposal in areas requiring heat exchange, fluid separation/separation or where hydrogen sulfide gas is being directly removed from a fluid such as a liquid or gas.
Below is a process schematic showing an example of an amine processing unit and where some waste fluids would be pulled off and sent to disposal. 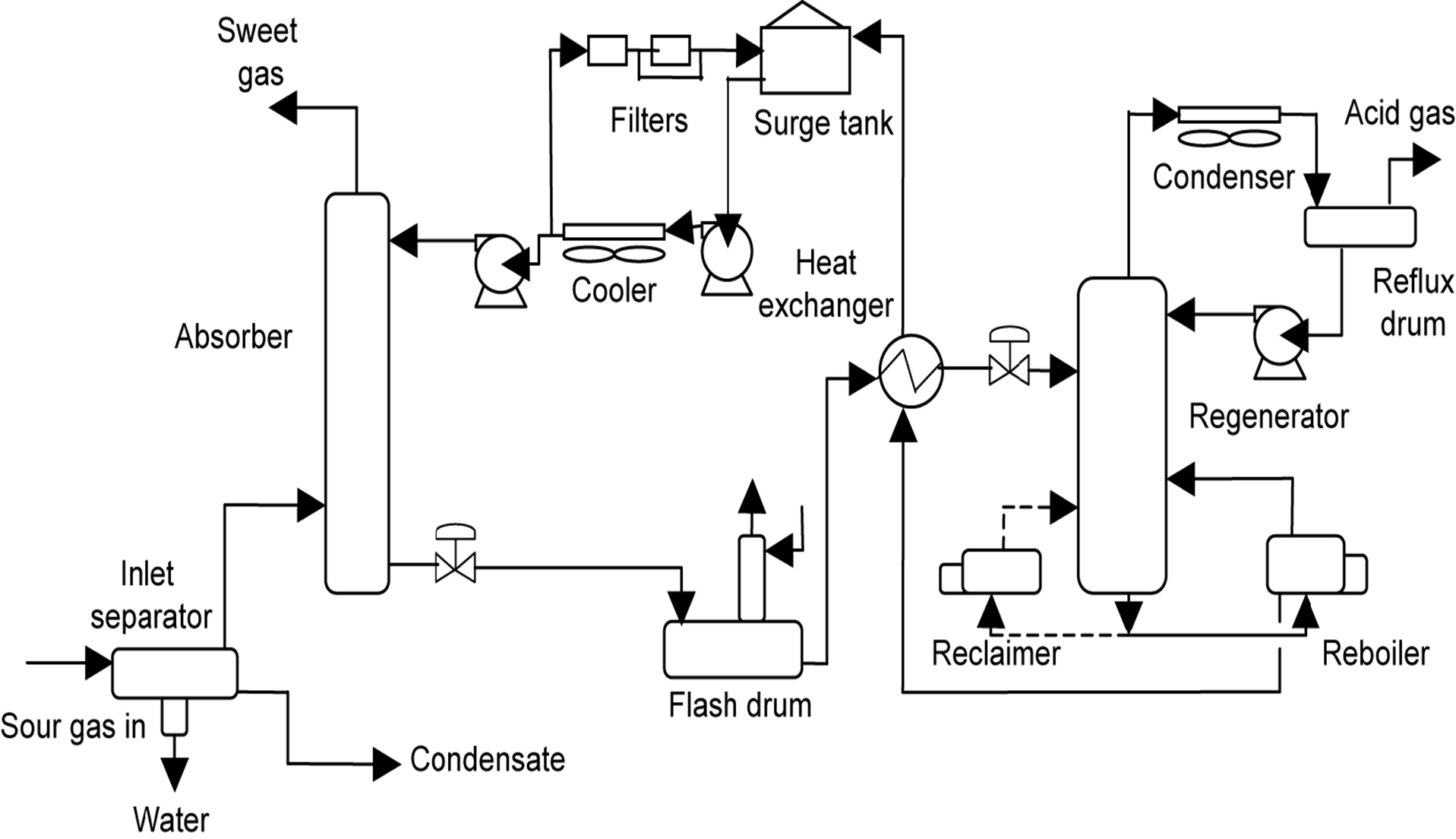 Upon inspection, you will notice that the processing unit contains a flash drum as well as several coolers or condensers and heat exchangers. But also note that this unit contains a surge tank. A surge tank could also have a vapor recovery unit on it. Not only that, but some of the condensers may also have accumulators where liquid is collected. And you guessed it; this vessel may have a vapor recovery unit, such as a condenser, attached to it as well. Not only that, since most processing units never run at 100% efficiency, but many of these vessels will also always contain a bit of sour fluid that, upon shutdown, requires removal, treatment, and disposal.

At the end of the day, if a unit operates with feedstock contaminated with hydrogen sulfide gas and also collects fluid that cannot be returned to the refinery processing loop, they will need a scavenger product like SCAVEX or SCAVEX AG. But keep in mind disposal requirements. If the treated fluid is being sent to a disposal well, they will need to ensure that the fluid does not contain any components that could cause solids precipitation and choke off the formation. Triazines and formaldehyde will do this. If that is a concern, be sure to use or recommend SCAVEX AG. This contains a dialdehyde that will not produce solids and cause formation issues for the disposal well.

World leader in the development of cleaning and sanitation products that are environmentally friendly.

We provide cost-effective solutions in fields as diverse as the petrochemical industry, mining, transportation, farms or food processing.